Mid-Century Tourism on the Silver River 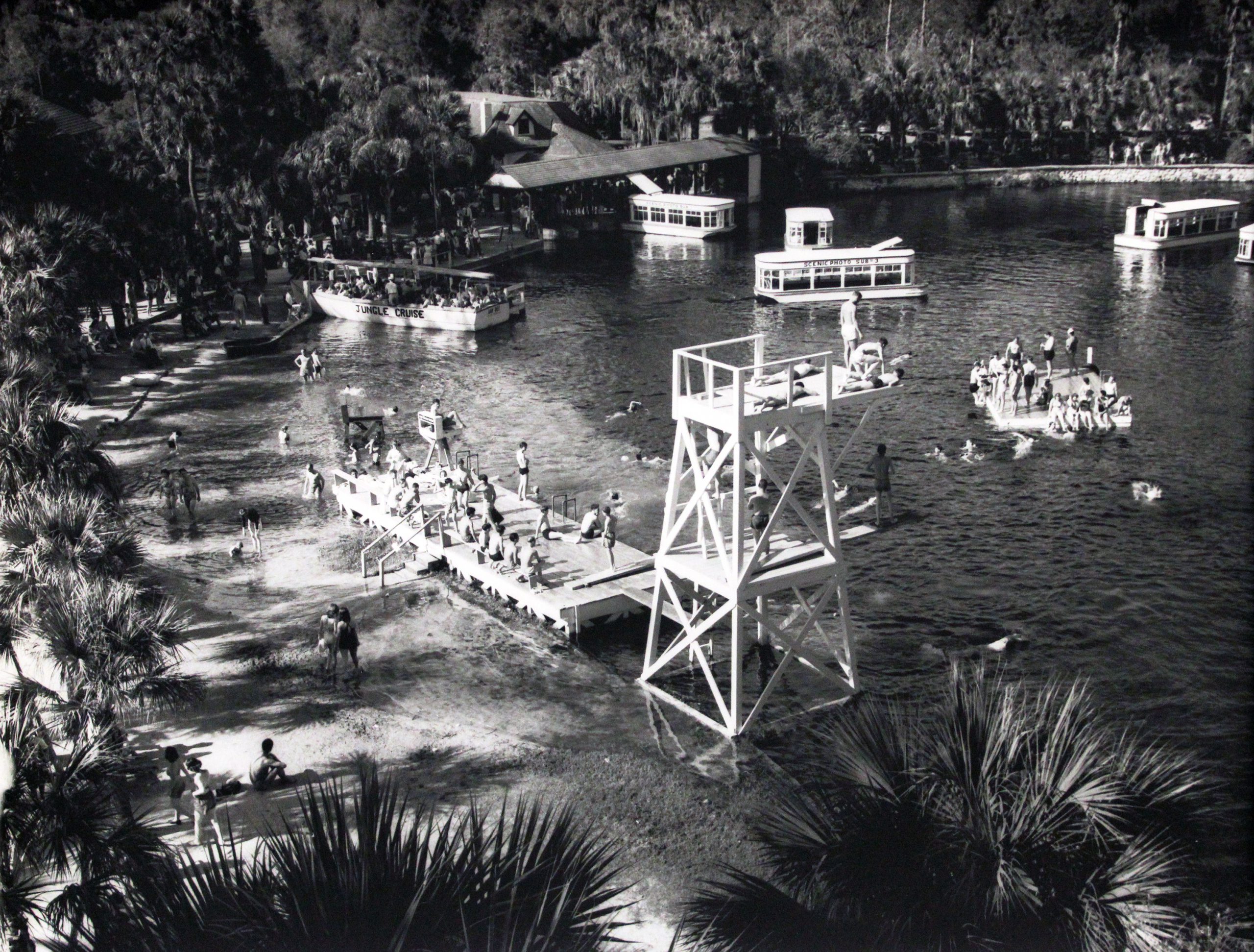 Bruce Mozert (1916-2015) holds a rich and unique place in Florida’s history. He spent 30 years as the official photographer for Silver Springs, Florida’s first tourist attraction – and for Paradise Park, the counterpart to Silver Springs located less than a mile down the Silver River that was a beautiful haven for African-American tourists. Using the crystal-clear waters of the Silver River, Mozert’s iconic underwater photography and exclusive access to both parks created some of the most widely recognizable tourism photography of the mid-20th century.

Mozert is known for pioneering the art of underwater photography and was a local legend in Marion County, home to both the Appleton Museum of Art and the Silver River. Before his adventures below the water’s surface, Mozert was living in New York, where he first began working as a photographer. In 1938, he was on assignment in Florida and detoured to Silver Springs to take publicity photos of Johnny Weissmuller, who was starring in a Tarzan movie being filmed there. The cast eventually went home, but Mozert stayed and would later become the official park photographer for Silver Springs.

By the late 1950s, Silver Springs, which was considered Florida’s first tourist attraction, featured a visitor center, glass-bottom boats, wildlife shows and more. Less than a mile away down the Silver River was the attraction’s counterpart, Paradise Park, established in 1949 by the owners of Silver Springs. Segregation laws in the South meant safe travel destinations for African-Americans were few and far between. Paradise Park, featured in “The Green Book,” boasted the same amenities as Silver Springs, providing an oasis to families from near and far for 20 years.

At the height of the parks’ popularity, from the 1950s to the late 1960s, together they attracted approximately 1.5 million visitors each year. Mozert was the official photographer for both parks, and his images captivated audiences and served as anchors for major advertising campaigns. In an on-site darkroom, the photographer would develop his photos of guests enjoying scenic boat rides, petting deer, and swimming in the crystal-clear springs, and of his most iconic subject: women and men posed underwater performing everyday activities like enjoying a meal, tidying a home, or participating in athletics.

Often executed in a pinup style popular at that time and influenced by Mozert’s sister Zoe, who was a renowned pinup artist, these photos playfully and ingeniously showcased the clarity of the water — enticing travelers from all over the world. Sometimes clearly posed and sometimes appearing candid, they also highlighted Mozert’s mastery of underwater photography. Staging these aquatic vignettes required creative thinking and ingenuity to convincingly simulate on-land activities, such as the use of dry ice or Alka-Seltzer to fake champagne bubbles, or tiny weights to prevent clothing from floating.

For 45 years, Mozert used Silver Springs and other neighboring waters as his backdrop, attaining corporate accounts such as Jantzen Swimwear and Mercury Outboard Motors. His photographs have appeared in magazines such as Ebony, Life, Look and National Geographic.

“Mid-Century Tourism on the Silver River” is on view through January 3, 2021. In addition to 35 photographs, the exhibition showcases other ephemera that highlight the photographer’s innovation, creativity, and significance to the history of tourism in Marion County, Florida.